Just because you're grown-up doesn't mean you don't want to party with your friends for a birthday celebration. Gather a group of friends to celebrate and play a few adult party games to get the action moving.

These printable games make planning your next adult birthday bash a snap. If you need help downloading the games, check out these helpful tips. 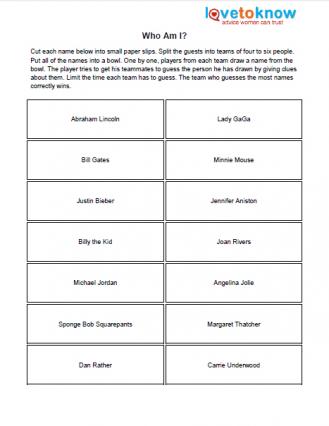 This game requires nothing more than scrap paper, pens, a bowl, and some trivia knowledge. To play:

A scavenger hunt is a good activity for any size of group. Divide into two or more teams and give each team a list of items to find. Designate a certain amount of time that players have to gather the items and physical boundaries that players must stay within. For instance, you can give players 20 minutes and can limit them to the house and yard. Alternatively, you might decide that players can branch out into the neighborhood or even the town.

Vary the game by asking players to perform a task rather than find an object. Ask them to document the task with a photo taken with a smart phone or camera.

Use the printable scavenger hunt list provided to help you come up with searchable ideas, or create your own that might include items or tasks related to the birthday boy or girl. If the person of honor is into basketball, ask players to find a dirty gym sock, bottle of water, or a picture of the birthday person playing basketball. If you're doing a task driven hunt, ask players to make three baskets at the hoop, dribble a child's bouncy ball, or impersonate a famous basketball star. 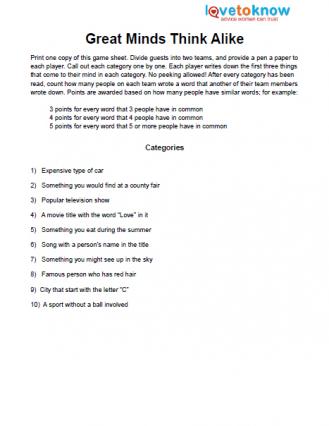 This game rewards players who are able to guess what other players are thinking and how they will answer a set of questions. Provide players with a variety of different categories written on individual index cards. You should create a minimum of ten categories, but you can have more. If you have a particular theme for your party, consider creating the categories to go along with that theme.

After every category has been read, count how many people on each team wrote a word that another of their team members wrote down. Then award and tally points.

Use the pre-made list of categories on the printable, or create one that relates to the party theme or birthday boy or girl's interests. For example, If the birthday girl is a master chef, create categories that are food-related to help honor her on her big day.

Board games are another good way to entertain birthday party guests. Many are created to be played by adult groups.

Apples to Apples is a current party favorite. Each player is given seven cards called "red apples", which have a noun word printed on it. The group chooses someone to be the judge, typically the birthday boy or girl, who then pulls a "green apple" card which has an adjective printed on it. He or she places it face-up on the table so that all players can see it. Each player then picks a card from their hand that she feels is the best match to the word printed on the green apple card, and then places it face down in front of them. The judge will collect the cards and shuffle them before judging which card is the best match to the green apple card.

The player who submitted the chosen red apple card wins that round and then takes the green apple card to show the win. Each player draws another red card so they have seven in their hand again. A new "judge" is chosen each round or the same player may continue in that role through the entire game.

The winner is the first player to accumulate a predetermined amount of green apple cards or until all players decide to end the game. The player with the most cards is pronounced the winner.

Another popular group game is Taboo. Divide the players into teams. Start the game play by giving one player from each team a card. On the card is a word, along with a list of related words. The object of the game is to get teammates to say the word at the top of the chosen card, without saying the words that pertain to it. For example, if a player gets the word "Santa" she may not be able to use words like "Christmas", "Claus", or "St. Nick." That player will have to try to get her teammates to say "Santa" by using other words like "Winter holiday mascot" or something similar. The game is timed so players will have to think fast.

Consider creating your own version of the game by creating cards with words related to the birthday person's life and interests. For example, if the birthday boy is into traveling, you might choose the word "China" and make the words, "Asia", "Great Wall", or "Beijing" taboo.

Battle of the Sexes

The Battle of the Sexes celebrates and highlights the differences between men and women and is the perfect game to play at a party with both male and female guests. Players divide into two teams: male and female. The goal of the game is to move your team's pawns across the game board. During game play, teams will have to answer questions about topics that are popularly associated with those of the opposite sex in order to be able to make a move. Allow the birthday girl's or boy's team to go first. For example, the female team might be asked to answer questions about automobile mechanics or football, while the men might be asked questions about fashion or baking. The first team who is able to move all four of their pawns across the board wins the game.

Check out this list of other helpful articles with adult party game ideas:

Every party should include some take-home gifts for the guests. Be sure to have a few prizes for the winners of the party games. Choose gender-neutral prizes such as boxes of candy, gift cards, and bottles of wine or sparkling cider for winners. If you have a theme, try to stay within it when choosing prizes.