With warmer weather on the way, vacations and trips to plan, summer solstice rituals fit into the mindset of fun and rejuvenation.

Summer solstice marks the first day of the beginning of summer in the northern hemisphere. This day is celebrated between June 20 and 23, depending on when the sun reaches its maximum elevation in the sky during each year.

What does summer solstice mean? In Latin, the words mean sun stands still. This occurs when the sun is directly over the Tropic of Cancer at noonday.

As we look back on early civilization, summer was a happy time of year for tribal people who lived in the northern latitudes. The heavy snows had melted and the ground was beginning to be warmed by the sun. Flowers and trees bloomed. Crops were planted and there would be more food in the months to come. The days were longer. This was a break from winter and the cold. People felt a connection with the sun, and love and magic were constantly in the air as they performed celebratory rituals.

Many ancient people celebrated summer solstice rituals. Dancing, lighting of torches and candles, courtship practices, and chants were on the agenda at these events. Some of the groups of people who took part in the summer rituals included: 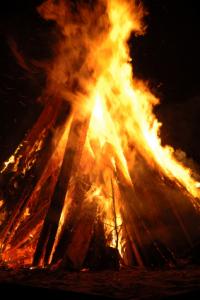 Bonfires are popular on the Night of Saint John.

Today people hold celebrations in June, and some of the rituals revolve around the mythic practices of summer solstice. There is food, drink, and even chants recited at special events to welcome in the longest day of the year. Typically, New Agers, hippies, mystics, and others gather at Stonehenge in the United Kingdom to watch the sun set.

Across the world, people gather to dance, light bonfires, eat, burn incense, and basically enjoy a festive time during the day known as summer solstice. In the United States, regions with Scandinavian origins such as Chicago and Minneapolis are more apt to join in the rituals of this day.

The fact that June weddings are popular even today goes back to the origin of earlier days when lovers met and were married during summer solstice. The belief was that the goddess was ripest and fullest during this time. Even the honeymoon dates back to this time when newlyweds were fed honey under the moon. This was believed to promote fertility among couples.