Although the game is the big attraction at a Super Bowl party, games will help keep guests entertained and get the laughter going at your celebration. Choose simple, fun games that appeal to guests of all ages and your party is sure to be one of the best Super Bowl parties yet.

Several families have Super Bowl parties, where friends and family come over to watch the big game. For many, it is considered a annual get together like Thanksgiving or Christmas. A successful Super Bowl party is all about having fun while watching the game. Planning Super Bowl home party games involves getting everyone in the action, even those who don't know an interception from a first down.

Wagers on the Game

Friends and family will often bet on the overall outcome of the game. However, you can also plan a number of fun wagers and guessing games. Instead of betting money, offer prizes for those who guess correctly. For game-related ideas, you can ask guests to guess:

However, commercials are as much a part of a Super Bowl viewing party as the game itself. To add some variety to your wagers or to appease the non-football fans, take bets on:

Calling Out Your Friends

If your party is filled with close friends or family, you can also have fun making guesses about your fellow party guests. However, make sure that none of the bets are mean-spirited. Some ideas include:

Create a list of trivia questions. Questions can be about Super Bowl history, recent games, the two teams facing off and even trivia about the teams' locations. You may even want to include famous commercials into the mix. If one of the teams in this year's competition is the home team, you may want to focus your questions on the franchise. You can pass out a sheet of questions for guests to fill out throughout the evening, or you can ask a few trivia questions during breaks in the game. Forming small teams can add fun to the game, in addition to keeping non-sports fanatics from feeling left out.

This game is played throughout the party and can result in some hilarious moments for the guests. Each person needs a whistle on a lanyard to wear during the party. One or two words are designated as off-limits. Choose words that your guests will tend to say a lot during the game such as football, touchdown or score. If someone says the forbidden word, the person who catches him takes his whistle. Play the game throughout the night, awarding a prize to the person with the most whistles at the end of the party.

While the commercials might keep you entertained during half-time, you can try this hilarious game with football-shaped crackers. Depending on the people, you'll split your group into teams of two. One person is the kicker, while the other is the field goal. 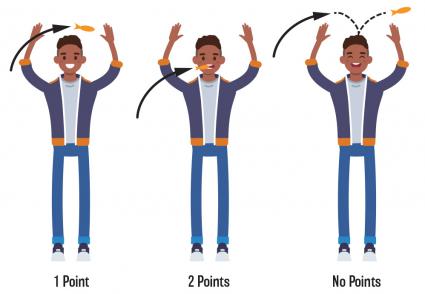 Are there kids on your Super Bowl party guest list? Plan some special Super Bowl games for kids. The adults can enjoy the games as well.

Adding football symbols or words to a traditional Bingo board provides a fun game for guests of all ages. If the children at the party are young, stick with football symbols to make the game easier. Make plenty of extra Bingo boards so the guests can rotate them as desired. Peanuts or pretzels make a fun and tasty marker for the game boards.

For this game, you'll need small stuffed footballs and a basket for each team. The kids will then pick a partner, football and basket.

Super Bowl Games for Fans of All Ages

If your party will include children and teens, Super Bowl party games will be even more important for keeping them interested. These games are sure to be a hit with everyone.

The Super Bowl cheerleaders shouldn't have all the fun. A friendly cheering competition pits the guests against each other in a battle of team spirit. If the group is divided down the middle when it comes to a favorite team in the game, use the divide to your advantage. Challenge each team to create a cheer complete with actions. Homemade pom poms using streamers and tape add a fun twist to the competition. After each group performs its cheer, determine the winner based on creativity and overall fun.

Create a list of Super Bowl words, football terms and words related to the party for guests to act out. For instance, if the New Orleans Saints are playing in the Super Bowl, you could include Mardi Gras or Bourbon Street on the list. Tailor the words to the age of those playing. Children can draw footballs, stadiums and jerseys, while adults may be able to communicate more complex football terms.

Purchase soft foam footballs for indoor use, or if weather allows, head outside during halftime for a fun contest. You can award prizes for: 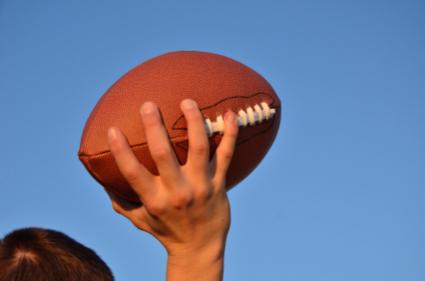 Test your popcorn tossing skills during halftime with this hilarious game. You will need popcorn and teams of two. The teammates will start close to each other at about 1 foot and try to shoot the popcorn into the other's mouth. With every successful shot, the teammate moves back by 1 foot. The team that is the furthest from each other after a few minutes wins. Switch the thrower and catcher and try again. Just try not to laugh.

If you have multiple television sets, set up a video game room for those who are more interested in interactive sports. Wii Sports can be fun for all ages, and football fans love playing the latest version of Madden NFL. Adults can take turns supervising the room, or a volunteer who isn't interested in the big game can take charge to coordinate tournaments and make sure everyone has a chance to play.

No matter which games you choose to play, they are sure to add to the fun of your next Super Bowl party. Games work well as a warm up before the Super Bowl begins or during breaks in the football game. Adding a few games to your Super Bowl bash is sure to keep the party interesting for all involved.