Teenage pool party games can add hours of entertainment and bring plenty of laughs to any summer gathering. Since many teens don't always enjoy structured activities, offer a variety of game options to keep everyone occupied. Games are also a great way to break the ice and ensure that all the teens are having a good time at the pool party.

If you want to add some fun party games to your next teen party, put a twist on some games to which everyone knows the rules. You can also add some new games to up the interest to the day as well.

Octopus Tag is like a basic game of tag played in the pool, but the person who is "it" ends up with extra help. Choose one person to be "it." When that person tags another guest, the tagged person joins hands with "it," and they continue to try to tag others. Eventually all but one guest will be part of the octopus, and that person starts off the next game as "it." 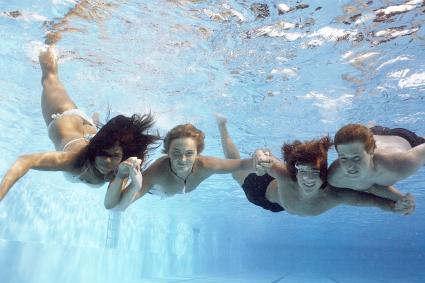 This is game is perfect to play in the pool. To begin, divide the teens into two teams and have them stand on one side of the pool. Place a watermelon that has been greased up with either vegetable oil or petroleum jelly in the middle of the pool and have the teens try to retrieve it and bring it back to their team. 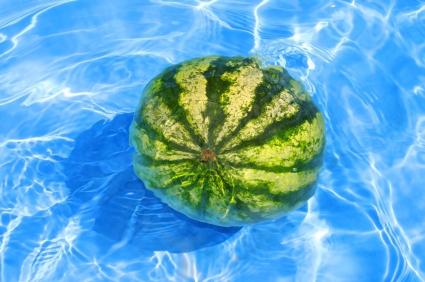 For this game, you'll need at least four teens and four pool noodles. The teens must first sit and balance on a pool noodle. Then they will work to joust against the other teen. The first to lose their balance and fall is the loser. 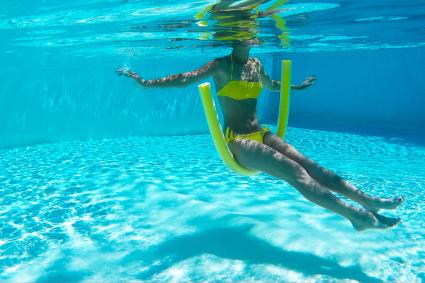 This game works best with 10 or more teens but can be fun with less. One person stands in the center of the pool while all the others are at one end of the pool. The bait will try to cross to the other side when the shark says go. Any bait tagged by a shark before reaching the edge of the pool at the other side becomes a shark. Game continues until there is only one bait left. That bait becomes the new shark.

With about 10 or more teens, you'll designate an "it" person. The rest of the teens will roam around the pool trying to say away from "it". When tagged, they'll put their arms in the air like a hotdog and freeze. To get unfrozen, they need to find two "buns" to surround them, one on the left and right. If the three are touching, "it" can't touch them, but once they run away, all bets are off. Keep playing until everyone is a hotdog or a bun.

For this game, you're going to need some rubber ducks and lots of teens. Give each teen or groups if you have a lot of teens a rubber duck. They must use their breath, waves, etc. to move the duck across the pool. They absolutely can't touch it with their hands, face, feet, etc. The first one across the pool wins. 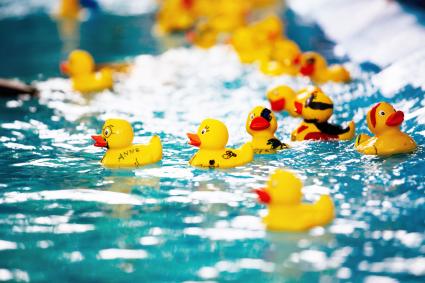 Just like Hungry, Hungry Hippo but with water and lots of real-life action. To play, you're going to need ping pong balls, a bucket, nets and six or more teens. One person will be designated the "Go" person. Have four teens with nets placed around the pool an equal distance from each other. One teen with pour the balls into the middle of the pool and leave. The Go person will scream "go!" Each of the four people in the pool must lunge at the balls with their net. They only get one lunge once then they must go back to their corner with their captured balls. The Go person will continue to yell "go" until all the balls have been captured. Scramble up the players and start again.

To begin this relay, divide the teens into two teams and have them line up on one end of the pool. One player on each team will be given a beach ball. Players must place the beach ball in front of them and use only their heads to push the ball down the length of the pool and back to their team. The next person in line takes over the ball pushing. Whatever team completes the relay first is declared the winner. 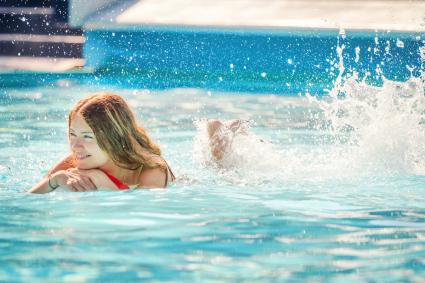 If the excitement is getting dull, don't forget these classics.

Keep an Eye on Safety

Any parent of a teenager knows that things can get rowdy at a teen party. It's especially important to keep your eye on safety at a pool party, since things can turn bad very quickly. A simple game of trying to knock someone off a pool raft, for example, can result in head injuries or worse. Let the teens have fun and release lots of energy but supervise them carefully to make sure things don't get out of hand.