Hosting a Nerf gun party that's successful and not a free-for-all means you'll need to have some pre-planned activities to keep kids busy. With just a little prep work, everything will be perfect for a great birthday.

Have kids "battle" it out to reach a prize. You'll have to play to find out what movie characters will come out ahead!

Set up large appliance boxes that are painted to look like buildings. They should be randomly placed throughout the party space. Inside one of the box buildings, include a small "token" that someone from the two teams needs to reach first to win. Hide this before the party begins. The token could be anything from a toy sword to a chest of candy.

Have kids carry movie poster shields featuring either a hero or villan from their favorite movies. They should be glued onto cardboard and fitted with a Velcro strap on the back to carry like a shield. You can prep the straps before the party, but let kids pick out their own posters to glue to their cardboard shields. It doesn't matter if someone picks the same character twice as long as there are a fairly even number of the two teams.

Safety note: All kids must wear protective eyewear for this game.

Kids should be fairly evenly divided into the heros and villans. Explain that the city has been invaded by a group of villans who escaped from their movies; they are on the hunt for the special token that will keep them in the real world permanently! The heros need to reach the token first in order to prevent this catastrophe from happening.

You will need at least two adults to help referee game play.

Target shooting can be done in the water no matter what season. You'll need to get things set up prior to the party.

In the summer, make sure your backyard swimming pool is filled with water. If you are not playing in the summer, set up a kiddie pool in the basement (on plastic sheeting, if needed). Print out duck targets on paper, laminate them, and tape to straws. Each target should be added to a small sailboat or inflatable floaty and released. Consider adding about one duck per one square foot of water space. 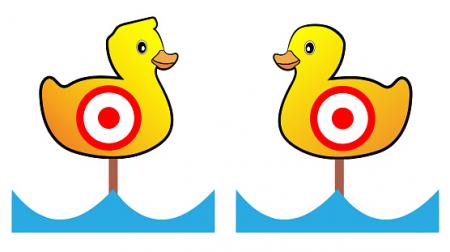 This game should be played individually with an adult to referee and check scores.

You're going to need to put some additional thought into this party theme before it even gets started. Consider:

Nerf blasters and foam dart guns are best-selling toys for kids of various ages. Planning a safe yet fun party is a great way to make your child happy on his or her birthday!