May Day is more than streamer laden poles and flowers in your hair. It has a long and rather sober history linked to the labor movement. Much of the world considers May 1 "Labor Day" and protests, marches, and remembrances are a stock part of the day while Western traditions often use it as a celebration of spring.

It was traditionally when Beltane or the halfway point of the year was celebrated. Many cultures celebrate May Day with such festivities as Maypole dancing, parades, feasts, and other spring revelry. 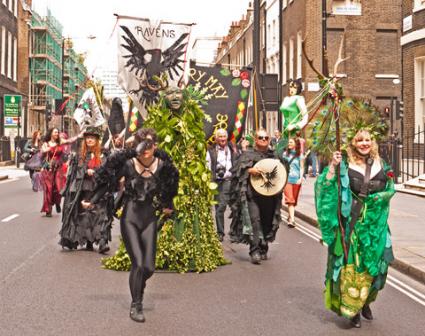 The Celtic festival of Beltane is held on May 1. This traditional celebration heralded the start of spring but also the approach of summer. It was a period that marked the halfway point between the darkness of fall and winter and the light of the coming growing season. Samhain is exactly 6 months from Beltane and the two dates are though to be significant for magic and periods when the veil between the living and the spirit world is the thinnest.

The celebration highlighted fertility, both in future crops but also in the people. Rituals and rites encouraged the spring harvest. Fire was a key element to May Day celebrations. The festivities often included performing ceremonies around large bonfires, while dancing, singing and eating were part of the fun.

Today's Wiccans and other groups still observe Beltane on May 1. Dressing up in fanciful costumes, feasting, communing around bonfires and wearing flowered crowns are just some of the ways the date to commemorate May 1.

One of the hallmarks of May Day is the May pole. These became popular forms of celebration in the 1800s although the genesis was probably much older. May Poles feature an erect lodge pole anchored to the ground. The top of the pole bore numerous brightly, colored ribbons. Dancers each grab a ribbon and then become part of an intricate dance which weaves the streamers into a vibrant braid. Going backwards in a circle will unwind the ribbons.

The dance may have been embedded in early pagan fertility rituals in Germany and likely the pole was originally a living tree. The Puritans frowned upon gaiety of any sort, so the tradition didn't take hold in the United States. Some European countries still utilize the May Pole as a segment of spring rites. Instead of a May Pole, Americans would place a basket of goodies, flowers, and other treats on the door of friends and neighbors.

May Day became synonymous with International Workers' Day in the late 1880s. Poor working conditions, long hours, and low pay were prevalent at the time.

Worker unrest saw numerous strikes that ignited mob behavior, vigilante justice, and finally, a large bomb blast in Chicago's Haymarket Square. Workers held a strike on May 1, 1886. Over 300,000 people walked out of their jobs and marched to demand an 8 hour work day. For the next few days, protests, and rallies were peaceful until May 4, when a bomb was thrown at Haymarket Square. It targeted the assembled police ranks, 67 of whom were hit. The remaining police opened fire and over 200 protesters were wounded. The day turned gory as 7 police officers and 8 civilians died.

May Day became a traditional date of remembrance and unity in the face of worker mistreatment. It also led to the regularization of labor unions and the eight hour work day. Many countries have embraced the holiday and made it their own, with speeches parades parties and marches all commemorating the day.

Modern May Day is relatively unmarked in the United States even though it is a recognized holiday in 66 countries.

Picnics, croquet on grassy lawns, children in starched white pinafores, and men and women in their best spring finery marked May Day in the mid-1900s. Today, children still sometimes dance the Maypole and exchange May Day baskets, but the meaning behind the day has largely become forgotten. 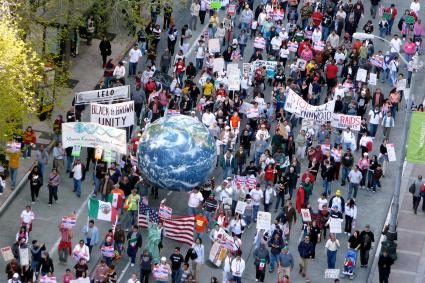 Several municipalities have May Day festivities with costumed attendees, flowered floats and often bands or concerts. Demonstrations and marches are still a part of May Day. A few well publicized marches have even become riots as seen in Portland and Seattle. However, in that same city, volunteers give out flowers on May 1 to any person who walks by. These are a symbol of spring, peace, and the promise of a new season. As a remembrance of Labor Day, flowers are a good start to planning any May Day celebration.

May Day traditions are leftovers from pagan times but some new traditions have roots in a struggle for equality and worker safety. No matter how you celebrate, do so safely.