Ready to rock the night away with a '50s-style cocktail party? Well, tie on your frilliest apron and start preparing retro recipes ranging from the ubiquitous onion dip and chips to the more exotic Baked Alaska.

It wouldn't be a '50s cocktail party without the drinks. Remember to stock up on those cute little paper umbrellas and swizzle sticks for an authentic touch. Just keep in mind that beer and wine were not super-popular potables in America in the '50s, so go straight for the mixed drinks.

For your party, you'll want to dredge up all the old supper club drinks. You know, the ones that are retro-chic these days -- gin drinks like the martini, Tom Collins, Singapore sling, sloe gin fizz, gimlet, gin rickey and a gibson. Then there are the rum cocktails like daiquiris, mai tai, rum and Coke, piña colada and planter's punch.

If you really want to get into the '50s swing, try using Tang instead of orange juice in your cocktails. Tang was created in 1957 but first marketed in 1959 and continued to be a fad into the '60s. It will alter the flavor of your mixed drinks and not in an altogether good way. You might want to stick with more mainstream mixers in your drinks.

Finger foods were a big cocktail party fad during the '50s. At their most basic, they included Chex Mix, celery stuffed with pimiento cheese or peanut butter, cheese and crackers, and salted sweet-and-spicy nuts.

In their fancier incarnation, they were known as canapés but, more often than not, they showed up as finger sandwiches or open-faced mini sandwiches, cream cheese roll-ups made with bread instead of today's tortillas, cocktail wienies wrapped in bacon and just about anything else wrapped in bacon, including shrimp, scallops, chicken livers, prunes and more.

Party-givers serving alcoholic beverages often like to provide a light main course even if the event is clearly an appetizer and cocktails party. In the '50s, thanks to canned soups, meats, frozen veggies and other labor-saving products, casseroles and one-pot meals were big and for a party where table space is often limited, a dish that can be eaten with a fork while standing is perfect. 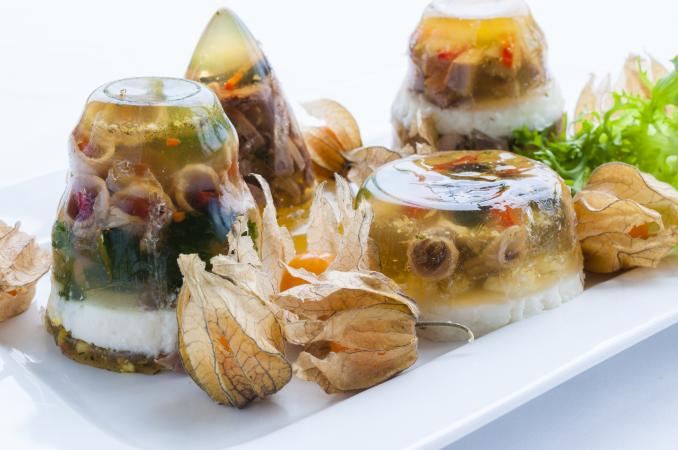 Molded sweet gelatin and savory aspic salads were all the rage and avocados started appearing in American salads in the '50s. Thanks to the flavored gelatins, cream cheese and ornate molds of the period, there was always at least one Jell-O mold at a party. Aspic molds featuring artfully arranged sliced or chopped veggies and, in some cases, pieces of chopped meat also were popular.

Not surprisingly, three-bean salads were all the rage because they were made with canned vegetables.

Dessert recipes ranged from simple chiffon cakes to flambéed classics like Baked Alaska, Cherries Jubilee, Bananas Foster, Crêpes Suzette and other French desserts due, in part to the fascination with the cuisine brought back to the States from returning WWII GIs.

Entertaining in the '50s often centered around food that was easy on the cook. Casseroles, gelatin salads and repurposed canned foods were all fair game and, often, the dishes had a Hawaiian or Alaskan theme when a new-state frenzy was going on with Alaska's admission as a state in January 1959 and Hawaii in May 1959.

Hawaii and its food and culture long held a fascination for the American public. After the end of WWII, tropical fruits like pineapple, banana and coconut and other ethnic foods GIs developed a taste for started appearing in everything from salads to main courses and desserts at backyard luaus and indoor parties.

If your cocktail party teeters on that fine line that divides '40s, '50s and '60s food trends, just go with it. Don't be a stickler for details but do try to get most of it right! For a little extra fun, serve up some frozen TV dinners on TV tray tables along with all your other '50s party treats.