Whether it's a backyard date night or a backyard barbecue with friends, you can create backyard games for adults with things you have on hand. Sometimes, the best backyard party game ideas are the ones you invent yourself. Try to think of ways you can recreate your favorite backyard games with the contents of your porch or garage.

If you love playing Spikeball, but don't own a game set, try making your own. This active backyard game is great for couples since you need four players.

Create a 3-D bullseye to play a fun new backyard game that's a cross between cornhole and darts. The game is meant for two teams of two, but can be played one-on-one.

Create a quick and easy cornhole game in your backyard by using a pallet as your cornhole board. You'll need bean bags to play. Simply set up your pallets so the slats are horizontal in front of you and play by standard cornhole rules. Since there are a few spaces where bean bags could go through the pallet, consider writing point values next to each one. 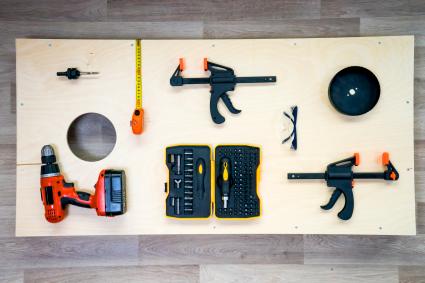 In the game of Bottle Bash, you try to knock down your opponent's bottle with a frisbee. You can easily recreate this modern backyard game using things you'd find in your garage. The game is meant for two or four people. 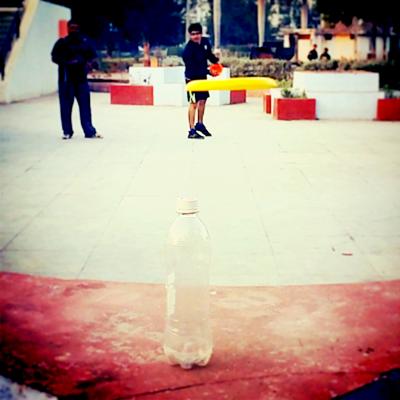 Make good use of all the bottle caps lying around from your backyard party with an easy game inspired by darts. You can have as many players as you want in this great outdoor party game for adults.

Create your own backyard version of KanJam out of two plastic garbage cans. Use a box cutter or other sharp tool to cut a rectangle about six inches down from the top of the can. The rectangle should be approximately 14 inches wide and 4 inches tall. You should end up with an open rectangular slot. Grab a frisbee and play by standard KanJam rules in teams of two.

Create a simple backyard game that resembles Beer Pong using cans and quarters. The outdoor game for adults without equipment is meant for two teams of two, but you can play one-on-one.

What do you get when you mix Ladder Golf and Beer Pong? Ladder Pong! You can play this game with any number of players and use any alcoholic or non-alcoholic drinks you want.

This adults-only backyard game could be a little dangerous, so make sure your playing area is free of anything that could get damaged. This game is meant for two people, but could be played in two teams of two.

What better place than your own backyard to have a little fun with inappropriate words that won't offend anyone? In this DIY Scrabble game, the goal is not to create the longest words, but the most inappropriate ones. You can play scrabble with two or more people.

Create a simple game of human ring toss in your backyard with hula hoops and some brave friends. You'll want at least five players for this large group game. All you need are about three hula hoops and a big open space. 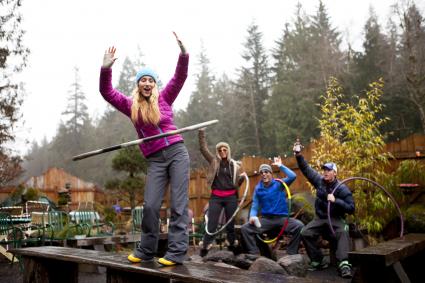 Make your own adult version of Candy Crush in the backyard using cans you actually crush. The game is best for two players, but if you have a lot of cans, you could have up to four.

Get Your Backyard Game On

Whether you're stuck at home and looking for fun or hosting a backyard party, there are endless creative outdoor party games you can play with large groups or two adults. Make your party memorable by trying out games your guests have probably never heard of, but will definitely want to steal for their own parties.