Dreidels are one of the first images that come to mind when you think of Hanukkah. But while many people can sing the short version of the popular Dreidel song, most non-Jewish people do not know the significance of the dreidel or even how to play the game. To get you ready for the Festival of Lights, this printable dreidel craft and lyrics to the dreidel song will have you spinning in no time.

History of the Dreidel

Dreidel is a traditional religious game played with a spinning top and is most closely associated with Hanukkah. But the dreidel is more than just a fun game; during the period of the Jewish people's oppression, it is said that allowed them to defy the ruling class and practice their religion in secret.

The Meaning of the Dreidel

During King Antiochus' reign in 170 BC, he prohibited the Jewish people from practicing their religion. To get around the prohibition, children studied the Torah in secret. When they were in danger of being caught, they would hide their Torah and pull out their dreidels, which were four-sided tops, to make it appear as though they were playing, rather than studying.

Today's dreidels are inscribed with the Hebrew letters nun, gimmel, hay, and shin. These letters are an acronym for nes gadol hayah sham, which translates to "a great miracle happened there." The miracle is the miracle of oil, when the menorah at the Second Temple remained lit for eight days, despite having only enough oil for one.

Many people, Jewish or not, know the Dreidel song; it's a well-known Hanukkah song. The song is not an official part of the game, though some people do like to sing the short version of the song during play, which is:

I have a little dreidel

I made it out of clay.

And when it's dry and ready

Then dreidel I will play! 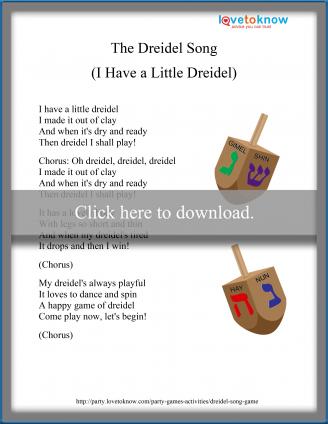 If you would like to hear the tune of how the song goes, you can listen to the YouTube video below by Jewish a capella group Shir Soul.

This printable allows you to create a paper dreidel that you can use to play the dreidel game during your Hanukkah parties or after a Hanukkah dinner.

You will need the following supplies to make the dreidel for this simple kids' Hanukkah craft:

To make your dreidel more festive, use blue or silver card stock (the colors of the Israeli flag) or look for card stock printed with Hanukkah designs in the scrapbooking section of your local craft store. To make the dreidel more sturdy, glue the template to a cereal box and proceed as directed. 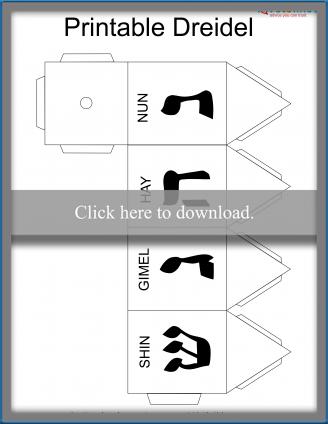 How to Make the Dreidel

How to Play Dreidel

Dreidel is played with two or more people. Each player starts with the same number of playing pieces (it doesn't matter how many you start with) for their pot. Use Hanukkah gelt (chocolate coins), pennies, beans, or any other item on hand as your playing pieces. Each player puts one piece in the pot. Once all players have paid into the pot, play begins.

Each player spins the dreidel. The letter the dreidel lands on determines what happens next.

Play continues until only one player has any pieces left.

Although the dreidel game is most closely associated with Hanukkah, it is not only a holiday game. Now that you know how to play, you and your family can create dreidels and play year round.